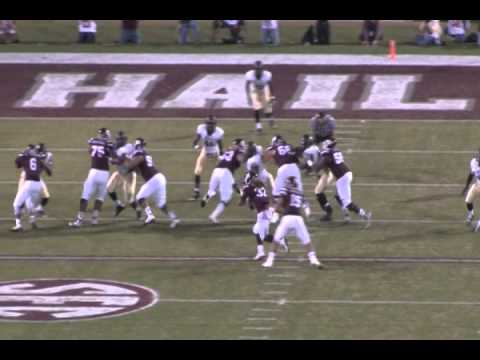 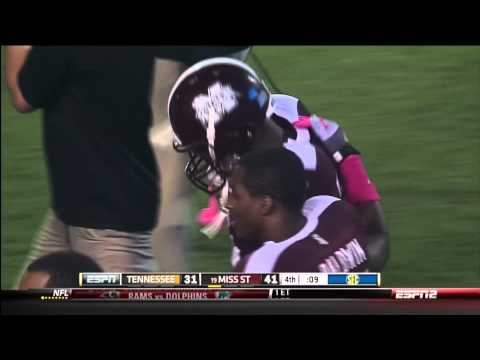 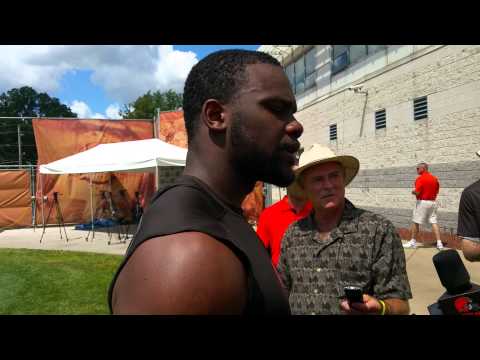 Malcolm Johnson plays Fullback for the Cleveland Browns. Malcolm was selected in the 6th round (195th pick overall) in the 2015 NFL Draft.

Malcolm Johnson was the starting TE for Mississippi State in the highly competitive SEC conference. Malcolm is a versatile player who can play TE/FB/HB/Slot WR and Special Teams while receiving many accolades during his Collegiate and High School career.

Malcolm is a vocal leader with great hands while being a quick learner and highly coachable. Malcolm was a consistent starter at TE for four seasons and named Team Captain his Senior Year. Malcolm played in 45 career games (23 starts), 79 receptions for 1,148 yards with 10 TDs.

Malcolm exhibits versatility at the TE/FB position, excels in pass catching, has intuitive football instincts and a willingness to learn and develop as a player.

Malcolm has the work ethic, talent, heart, and determination to succeed as a professional football player, and will reward the team that signs him. Malcolm is the type of player that would be an asset to your team both on and off the field.

2014 (SENIOR SEASON): Team captain in played in all 13 games with 12 starts … Was the top tight end on the squad and the fourth-leading receiver, hauling in 28 catches for 380 yards and three touchdowns … Started at tight end in the season opener Aug. 30 vs. Southern Miss., catching two balls for 29 yards and a touchdown … Caught a 15-yard touchdown pass in the Sept. 13 win at South Alabama … Pulled in a 25-yard reception on the first play from scrimmage for MSU’s offense in the Sept. 20 win at No. 8 LSU, setting up the game’s first touchdown … Tallied a team-high five catches for 60 yards in the Oct. 11 win against No. 2 Auburn … Totaled a season-best 74 receiving yards on four catches at No. 3 Alabama Nov. 15 … Registered two catches for 28 yards and a touchdown in his Senior Day win against Vanderbilt … Made three receptions for 36 yards in the final game of his career at the Orange Bowl.

2013 (JUNIOR SEASON): A second-team All-SEC selection by the league’s coaches after finishing the year with 30 receptions for 391 yards and two touchdowns … Ranked third on the squad in receiving yards … Hauled in a 13-yard touchdown in the Liberty Bowl win over Rice … Caught 8-of-13 passes (61.5 percent) thrown to him on third down, converting seven into first downs … Tied for second on the team with 19 receiving first downs … Caught three passes for 51 yards at Arkansas (11/23) … Turned in best game of career against Alabama (11/16), registering personal bests in receptions (six) and yards (84) … Hauled in two passes of 20 or more yards versus the Crimson Tide after having three in the first nine contests of the campaign … Caught first touchdown pass of the season in the opening quarter against Kentucky (10/24) on a career-long 60-yard reception … Three of four receptions against Oklahoma State (8/31) went for first downs.

2012 (SOPHOMORE SEASON): Missed the first five games due to injury, but played in the last eight games of the season, including a start at Alabama . . . Made his season debut in win over Tennessee at home, catching two passes for 34 yards and a touchdown . . . His one-handed touchdown grab on 4th-and-Goal from the UT nine-yard line with nine seconds left iced the victory for the Bulldogs in dramatic fashion . . . Gave MSU a first down with a 13-yard reception at Alabama . . Tied a season high with two catches for a season-best 40 yards at LSU . . . Caught a 27-yard pass in the home finale vs. Arkansas . . . Finished the regular season with two catches for 33 yards in the Egg Bowl at Ole Miss ... Hauled in two catches for 24 yards in the season-finale Gator Bowl vs. Northwestern.

2011 (REDSHIRT FRESHMAN SEASON): Named to the All-SEC Freshman Team in a vote by the league’s coaches after leading all SEC freshmen tight ends in receptions (11) and receiving yards (206), while tying for the lead in touchdowns (3) . . . Played in 11 games and started at receiver against Alabama . . . Had one reception for 22 yards against LSU . . . Caught his first career touchdown against UAB, where he had one reception for 20 yards . . . Had a season-high 51 receiving yards against South Carolina . . . Caught a season-high three passes and a touchdown in a win against Kentucky . . . Caught four passes in his final four games of the season . . . Had his career-long catch of 37 yards in a Music City Bowl win over Wake Forest.

Rated a three-star prospect by Rivals.com and ESPN.com ... Listed by ESPN.com as the No. 75 wide receiver prospect in the nation and by Rivals.com as the No. 33 recruit in Alabama regardless of position , Most Valuable Player at Rivals.com Ultimate 100 Camps in Birmingham and Atlanta; Mississippi State - 2014 Team Captain, 2013 All-SEC: Coaches’ and 2nd-team All-SEC, player of the week honors, 2011 All-SEC Freshman: Coaches’; 2014 - John Mackay Award watch list, made finals for the John Mackay Award this year