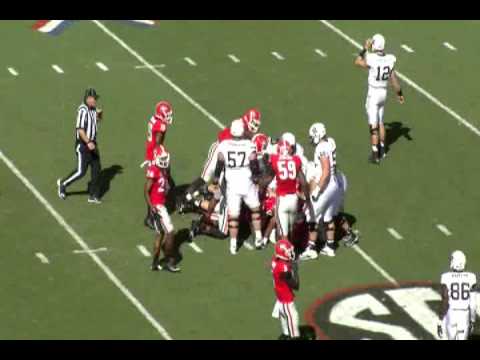 PRO DAY RESULTS - Josh delivered a stellar performance at the Georgia Pro Day and looked great on positional work. His 40 time of 4.82 has him tied for 10thagainst all DL players at the NFL Combine. Josh posted a Vertical of 33" which has him tied for 5th.

Josh Dawson is a talented football player who played DE for Georgia in the highly competitive SEC conference. Josh had a productive career at Georgia and has received many accolades during his Collegiate and High School career.

Josh exhibits versatility at his position, intuitive football instincts and a willingness to learn and develop as a player. Josh has always been a team leader while being a quick learner and highly coachable. Josh has the intelligence, work ethic, talent, heart, and determination to succeed as a professional football player, and will reward the team that signs him. Josh is the type of player that would be an asset to your team both on and off the field.

2014: Played in 13 games making four starts ... 17 total tackles ... tied for the team lead with two fumble recoveries, including one for a touchdown ... registered a career-high eight tackles vs. Charleston Southern which led the team ... recovered two fumbles, including one for what proved to be the game-winning touchdown, vs. Tennessee ... posted a career-high three tackles and recorded his first career sack vs. No. 16 Clemson ... recipient of the Peter and Kay Amann Football Scholarship and the Charles G. Rood Football Scholarship.

2013: Played in 12 games, making one start ... registered eight tackles on the season, including one for a loss ... recipient of the Charles G. Rood Football Scholarship.

2012: Played in 13 games ... had two-tackle performances against Florida Atlantic and Vanderbilt ... recipient of the Col. Robert L. Jackson Family Scholarship.